Recipe for Christmas without extra pounds

The mountains of potato salad, sandwiches, sweets, alcohol and hours spent in front of the TV screen symbolize modern Christmas for most of us.

No wonder, then, that many people get fat during the holidays, and after the New Year they try to lose excess weight. According to experts from the General University Hospital in Prague, it is not necessary to give up all Christmas goodies. Just follow a few rules and compensate for the food with your daily movement. According to doctors, we should realize already during pre-Christmas purchases that we will store everything we eat in addition, especially if we have a weight problem, in our fat stores and we will work hard during Christmas. "It's unbelievable how many tens of tons of solid fat can be found in the Prague sewers from Christmas meals. And it is difficult to estimate how many tens of tons our current and future patients will retain in their bodies. You don't have to lose weight on holidays, but having the same weight on the Three Kings as on Nicholas is such a small victory, " introduced by doc. MUDr. Martin Matoulek, Ph.D., physician III. internal clinics - clinics of endocrinology and metabolism of the General University Hospital in Prague (VFN) and the 1st Medical Faculty of Charles University.

To maintain weight, according to experts, it is important to be aware of the energy value of the food we consume. We can use various applications for this purpose and continuously monitor our income. "In general, it is recommended not to have snacks such as sweets or nuts displayed on the table during the day, but to put a certain amount on a plate and eat it, for example, as a snack with coffee. We must not forget about alcohol, which not only has a high energy content, but also increases appetite and is even directly associated with the consumption of other delicacies, such as beer sausages or fatty cheeses with wine. At the same time, fat contains twice as much energy as sugar, " pointed out Mgr. Aneta Sadílková, nutritional therapist of the General Hospital and the 1st Medical Faculty of Charles University.

For more information, including a table of nutritional values of some popular foods, see press release. 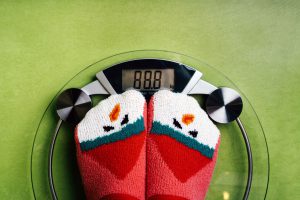