As many as 70,000 Czechs have no idea that they have hepatitis C

Hundreds of millions of people around the world are infected with hepatitis C. Most are unaware of their infection. Symptoms may not appear until ten or twenty years later.

With the discovery of the virus in 1989, researchers have gradually developed drugs that can now cure a patient almost 100% and without side effects quickly. Among the guaranteed centers for the treatment of the disease is also the General University Hospital in Prague, which in recent years has completely healed almost 150 patients with hepatitis C. The Nobel Prize in Physiology and Medicine was awarded on 5 October 2020 for the discovery of the hepatitis C virus.

In the past, no one knew what caused a certain type of chronic hepatitis, what infection. The discovery of the virus made it possible to describe the disease and start looking for drugs that could affect the virus and remove it from the body. According to doctors, viral hepatitis C has influenced the development of the entire field of hepatology in recent decades and has completely dominated it since the 1990s. Thanks to extensive research, the researchers also developed a number of important non-invasive methods, such as non-invasive measurement of the amount of connective tissue in the liver, so-called liver elastography, which replaced the liver biopsy.

The discovery of the virus revealed that jaundice type C causes inflammation of the liver and often leads to liver cirrhosis or complete organ failure. The first drugs had a lot of side effects and most of the virus remained in the body. This did not change until a few years ago, when scientists discovered so-called direct-acting antivirals. Due to the discovery of the virus, highly sensitive blood tests are now available that have eliminated hepatitis after transfusions. Current antivirals are almost 100% effective, are given in tablets without side effects, and treatment lasts only two to three months. Unlike previous treatment, doctors can now treat patients with more advanced stages of cirrhosis.

Hepatitis C treatment is available in specialized centers in the Czech Republic. The center in the General Hospital offers two ambulances, in the main area on the IV. internal clinic and in the Faculty Polyclinic. 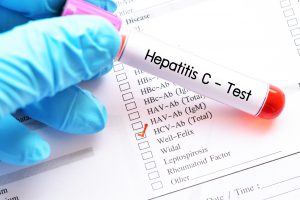