Without a unique artificial lung, the transplant would not survive

The patient, whom VFN doctors were able to keep attached to an artificial lung for 143 days, returned home after a lung transplant and a series of operations.

For a record 143 days, doctors at the General University Hospital in Prague (VFN) were able to keep the patient connected to an artificial lung while they were alive. The very first Czech bypass bypassing the lungs saved the life of a thirty-six-year-old woman with severe pulmonary hypertension and allowed her to undergo a lung transplant. However, several months of extracorporeal support required heart damage and a number of other surgeries. Thanks to top teams of medics, the patient returned home after a year of hospitalization.

The patient suffered from severe pulmonary hypertension and was admitted to the General Hospital in December last year with massive sputum of blood from the lungs and heart failure. Doctors saved her from a serious condition by introducing extracorporeal membrane oxygenation, the so-called ECMO. "We tried several times to end ECMO support and prepare the patient for a lung transplant, but we failed. Her condition was so severe and severe that the transplant was impossible without some bridging of the critical phase by something original that would allow her to rehabilitate and mobilize. Therefore, we implanted in the patient a unique bypass that bypassed her lungs. These were so damaged by hypertension that the blood was not pushed through them and without the support of extracorporeal circulation it would not survive further, "explained the procedure of doc. MUDr. Martin Balík, Ph.D., EDIC, chief intensive care physician of the Department of Anaesthesiology, Resuscitation and Intensive Care, General Hospital and First Medical Faculty, Charles University, added: heart powered by her own right ventricle. The body thus had time to recover and prepare for a lung transplant, which was its only perspective. ”For more information, see press release. 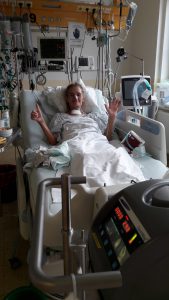