A new diet for patients with swallowing disorders

The revolutionary catering pilot project for patients with swallowing disorders was launched on November 7, 2022 by the General University Hospital in Prague (VFN) as the first medical facility in the Czech Republic. According to the original recipes of VFN nutritional therapists, the cooks at the hospital prepare food for approximately two dozen patients every day. The diet meets high demands for taste, aesthetic impression and nutritional content. At the same time, a unique cookbook was created, which VFN will provide to all facilities where patients with swallowing disorders are cared for. Thousands of people in the Czech Republic will once again be able to indulge in the joy and enjoyment of food, which will significantly help their mental and physical condition.

Difficulty with biting, chewing and swallowing (dysphagia) mainly affects people with neurological diseases, stroke patients or patients with oncological diagnoses, the elderly, individuals with jaw injuries,
in recent years, also patients with covid, for whom swallowing was extremely difficult. Everyone had to change their eating habits and the food itself. Until now, patients with dysphagia were mostly dependent on a mixed diet of unattractive appearance, color and taste, which was definitely not tempting to eat. At the same time, it is precisely the sick who need a balanced, nutritionally valuable diet that will facilitate recovery and prevent malnutrition and dehydration that threaten them. This has changed thanks to the new catering concept at VFN.

"For seven years I have been looking for ways to help people who have difficulty swallowing, suffer from anorexia and are at risk of malnutrition. I tried to convince them to eat, but the mixed, colorless, tasteless food that the hospital was offering at the time was not very appealing to them. No wonder they usually ended up on IVs, dehydrated
and malnutrition,” explains the motivation for the emergence of a revolutionary way of eating Mgr. Lucie Růžičková, head of nutritional therapists at VFN, and adds: "The problem was mainly the consistency of the food. Patients with swallowing disorders cannot consume regular solid or liquid food, which they easily inhale. In general, the thinner the food, the more difficult it is for them to eat it. And we didn't have any thickener available to modify the diet that would meet the demands of dysphagia patients." 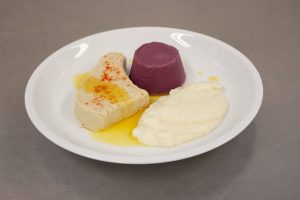